Mistakes I've Made a Few

I think Ira Glass and I are the only two people in the world who don't like Frank Sinatra's classic song "My Way."  I also agree with Glass that the best line, only good line of the song, is "mistakes, I've made a few".  The one honest line in the whole song.  What I mean is if you are trying.  If you are going after something more than what you have been given then you are going to fail. You are going to make mistakes.  Suceeding comes in learning from them and moving forward.  Still those mistakes can stick with you a long time and sting in memory nearly as bad as in the doing.  So here I will highlight a very short list of some of my many many mistakes and what I learned from them and how often I repeated them.

We'll start at the top.  Biggest mistake. I did core work off and on and with little or no direction.  I had some coaches who suggested it and others who left it to us to do it ourselves. I never had one who was all over it.  I don't think any old core work would have changed my life but I do believe if I had started doing a truly organized well thought out program, like the building a better running dvd stuff or John Cook's stuff I would have had fewer injuries and more to the point I would never have developed the coordination problem that has defined my career.  The answer to this problem was not dropped at my feet but I also didn't get out and go after it.

To be honest if I could get in a time machine and go back and talk to my younger self I would tell him to go to yoga.  It works for me.  It is in balance it mixes flexibility with core strength and works all the joints in full range of motion.  I realize that me finding yoga back then is a long shot but again if I could go back in time that is what I would suggest to myself.  Oddly when I was in high school and not running nearly as well as I wanted I had a fantasy that an older successfully me would come back and tell me what I needed to do but it never happened,

Strides.  I can't tell you how much I wish I had done more strides.  I think back to summer runs in high school and I would often do 10x100y sprints on the football field after the run but with 10 seconds rest.  It was a near vomit inducing session and totally not what I needed!  In fact it was everything I didn't need.  I was trying to make it HARD.  I though hard was better.  What did it accomplish?  It drove up my anaerobic fitness up but this was during the summer when I wasn't racing and any races I did were unimportant.  So a pointless gain there.  I was practicing sprinting in pain.  My form was failing apart.  I was building bad habits that would lead to injuries later.  Yet with such a small change this could have been exactly what I needed.  If I had taken full recovery between those 100's and focused on good strong form and feeling relaxed at speed it would have improved my form and my ability to relax a speed.  It would have built my running muscles up in a way that would have helped avoid injuries later down the line and would have helped me improve much faster as I developed aerobically later on.  Also more immediately I could have learned to be efficient at the faster paces and I would have run faster in high school as well.

I kept up with this mistake through college and beyond.  At best I tended to do strides about once a week and rarely more than 10 of them.  I honestly think someone like me who has such speed issues and can handle a lot of work I should have been doing 20 to 40 strides a week from very early on.   When I have and do make them a priority my running improves but still I struggle getting them in sometimes.  I needed to make this a habit in the beginning and my overall career would have been a full notch higher than it was.

Next up I was way late getting to aerobic work.  I don't think this hurt my overall development as I really got after this later but I think it did greatly slow my improvement and greatly hurt my high school and college careers.  If I had done more of this sooner, i.e. early in high school, and built my miles through high school in a steady way I would have run much better in high school and had a lot less injuries in college.   I ran at a jr/sr. high so I started training with the varsity in 7th grade.  I was running 30 miles my first week and my junior year in high school I was still running 30 miles a week.  I ran 10:22 for two miles my freshman year in high school but by the end of my junior year my personal best was only 10:06.  My senior year I upped the volume and ran 9:47.  So I improved 16 seconds in 3 years of steady low miles while trying to increase and improve workouts and then dropped 19 seconds in one year of increasing volume.  On top of that my improvement from my senior year in high school through college over the 3k from 9:10(estimated off 2 mile time) to 8:20 is greater than my improvement in high school!  There is no reason for that.  I was working hard in high school but to not increase your volume year to year is just stupid.  Had I increase my average weekly mileage by 10 to 15 miles a week each year of school I have no doubt I would have at least run around 9:20 for the two mile.

Not only that but I would have been much much better prepared for the physical demands of college running and I would have avoided most if not all of the injuries I ran into there. Which means I would have likely run much faster there as well.

Sadly my miles were largely low because of my high school coaches desire to help us avoid injuries.  As well intention-ed as this idea was, and it was EVERYWHERE in the 1990's it couldn't have been more wrong.  By doing more harder anaerobic work without building the aerobic system and the muscular system through steadily increasing easy mileage we were setting ourselves up for failure and injury in the long run.  So many high school coaches at the time were so proud that their athletes were 'under trained' and so would not be burnt out for college.  Thing is they were not ready to train in college. We were all two years of good training away from reasonable college training and that meant coaches at the NCAA level were forced to either risk injury by giving us the training we should be doing or to accept up front that we would only reach lower levels of performance because they were going to build us up like we should have been doing in high school for the first couple years.

This isn't to say that more and harder is always better in high school it isn't.  There are a few very high profile programs that have great success in high school but who's athletes rarely have any success after school.  Even a quick glance at these programs shows they are doing high mileage with VERY hard high volume anaerobic work and very few athletes can sustain that physical pressure along with the emotional pressure to compete well.

In those programs defense also.  When you have a really amazing program it is a community of success where each team member builds and helps all the others. Each team member has a part in creating the success of their teammates. Competing as part of the team has great meaning and value and this causes individuals to find their maximum best selves. It is very hard for an individual to succeed in a lesser program after being a part of something that 'magical'.  Suddenly the new goals seem cheap and the level of focus around them half-assed and as such sustaining it alone becomes very very hard.

The last big mistake I want to talk about is a bit different.  The source of this failure is one of my greatest strengths.  As my coordination problem got worse and worse I refused to focus on other things and instead wasted season after season chasing a marathon return when I could have done better by focusing on other things and leaving the marathon until I was able to do some of the training.  Instead each time I had the faintest hope of a marathon return I would dive back in full force and re-enact my standard failure.  A few times I had real reason to do this but the rest were just silly.  The few cycles I stepped away I was rather successful.

Don't get me wrong I was not going to make a national team at 5000m or anything.  I am however a guy who has run for running sake.  I have always been in it to get the best out of myself and as such a few more cycles to chase my best at the shorter distances though it would not have made me any more money or led to national titles could have produced a few real solid pr's and other 'neat' achievements.  The few cycles I did this on resulted in my short distance PB's, breaking 14' for 5k and qualifying for a couple of national championships indoors.

In the end you will never avoid all mistakes.  It is about learning from your mistakes.  It is far far better to reach for the stars and fall short than to not reach for fear of failing.  Every great success in life has failed more times than you can count.  They have just learned from those mistakes and got up and dusted themselves off and moved forward.  That much smarter.  That much tougher and that much more humble for the experience.

So yes mistakes I have made a few…  but I did it my way and unlike Frank I'm thankful for them all and I'm ready to make a few more. 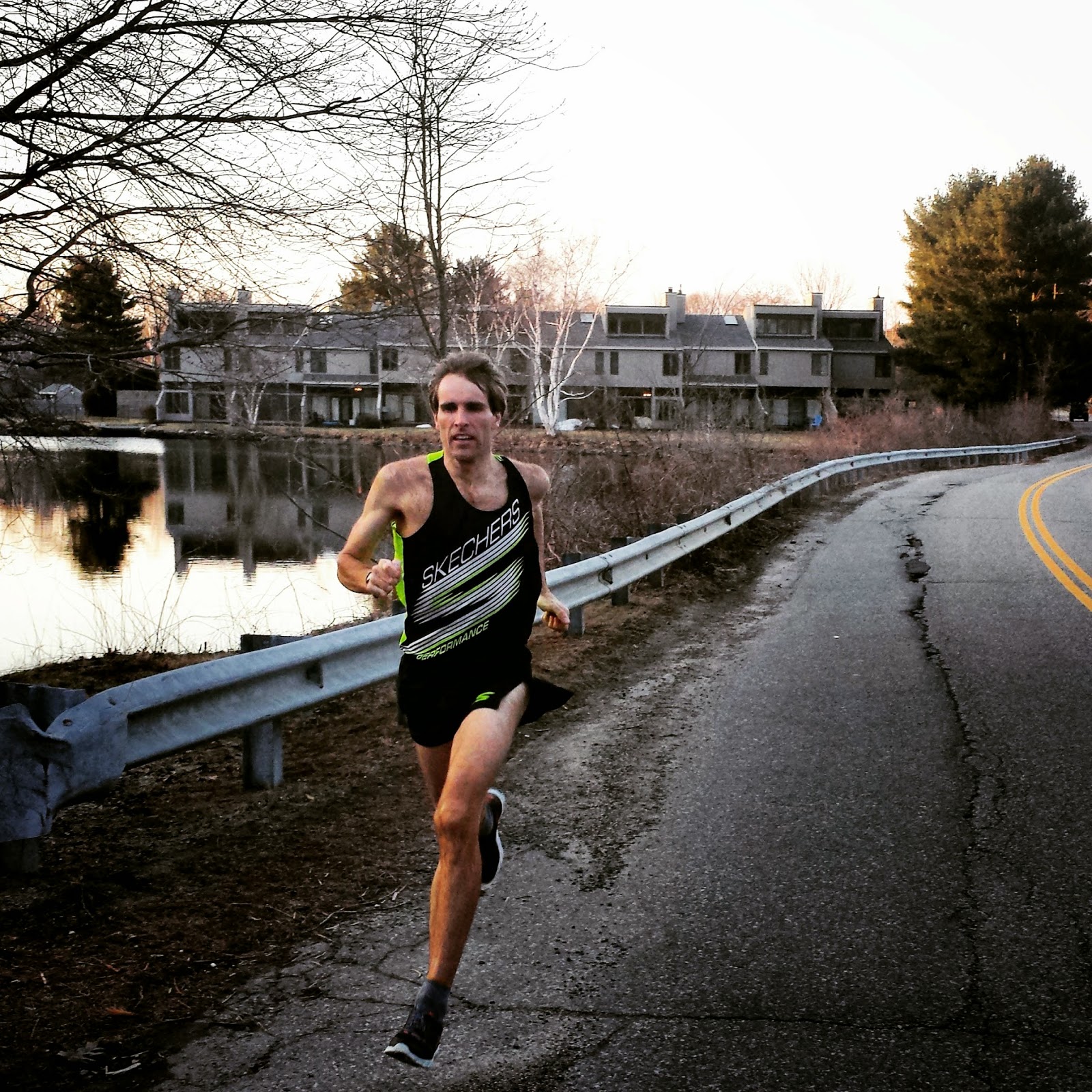 Posted by nateruns@hotmail.com at 6:35 PM

"I've been a puppet, a pauper, a pirate, a poet, a pawn and a king
I've been up and down and over and out and I know one thing
Each time I find myself flat on my face
I pick myself up and get back in the race."

How about that line from Franky, I'm sure you like that one. :)

Danny- that is a winner.
-nate

So are you. Go get 'em, coordination or no coordinate, you busted your ass. I'm proud to tell people I follow you. By example you make the world a better place. A 2 hour marathon is not worth more than that.

I've always been confused about yoga and running, is there a balance you've attained Mr. Jenkins? Also good luck in the boston marathon.