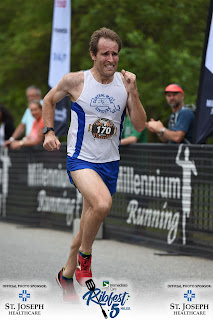 After the race last weekend, which was pretty humid, my legs were just junk for a few days.  I wan't sore and I felt find walking around but when I would run my legs felt crushed and I felt very heavy and with no power.  I was also feeling really dehydrated overall.  I had my last two days of school on Monday and Tuesday and then my summer vacation started.  I didn't get hired for summer school so I'll at least be getting some quality recovery in.

Wednesday Noon road and trail 10, pretty hot and humid, 1:09:06.  Felt pretty shitty but a shade better then the last two days so I decided on an easy day for tomorrow and to try 100's on Friday.

Friday Noon stupid humid.  I had been out in the AM and it was humid but didn't feel too bad.  As I was getting ready to run I checked the temp and it was like 82 or so and I thought nice it hasn't really warmed up this will be great.  I knew I was wrong the moment I opened the door.  It was intense.  4 mile warm up to the track in 29:13 then drills, 20x100m at an average of 16.0 with very slow 100 jog recoveries, covered 4k, then 4 mile cool down in 27:38.  It was so hot that I actually drank out of a discarded water bottle at the track because I wasn't sure I would make it the 4 miles back to the house without some water.

Saturday AM 8 miles around Phillips fields and track mostly with Melissa.  I did her warm up, jogged around while she did drills and strides, then paced her 4 mile tempo run in 26:00 then jogged during her 4 minute recovery and paced her on a 2:49 800 going 93/76.  Then an easy cool down with her. It rained pretty hard at times but the cooler water felt very nice.

Summary 61 miles and a couple of light workouts a nice step in the right direction.

Monday off- kids had a cruise after school as a field trip and knowing I had a long couple days I decided to sleep in to 5:50 and skip the AM run as well.  Got home about midnight.  There was a time but I'm not fit enough for that sort of crazy shit at the moment.

Tuesday  Kids had another field trip so I spent 8 hours outside in the 90 degree sun, lot of fun but I was pretty zonked
PM 5 miles with Melissa in 44:47 we were crawling and I wasn't complaining!

Friday PM 3 miles with Melissa and Uta in the rain, just exhausted at the end of a long week and decided to take it easy, 22:12

Sunday AM 2 plus warm up with Melissa, some strides, race Ribfest 5 mile, USATF-NE championship, 12th place, 25:55, humid.  was 15:41 at 5k which is about equal to the race I ran a travs trail a few weeks back so a decent step in the right direction.  The last 3k sucked, 10:05, but it had a long gradual uphill that caused everyone to slow, leaders ran around 9:25, and I was pretty done with the humidity.   Not what I had hoped for looking at things as I started running a couple months ago but given how little I have done, really just some jogging around, I'll take it. 3 mile cool down with Melissa in 25mins tot. 11

Summary 42 miles, one race.  My last day of school is Tuesday so I'm really hoping to get back in the game over the next couple of weeks. I feel pretty good and if I come out of the race ok I should be good for a jump up in miles.  I'd love to be around 60 this week but even more I would love to start doing a little training and not just jogging. 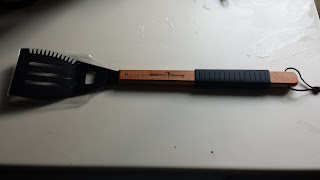 This is the sweet Millennium Running grilling spatula I one for my age graded performance. I didn't own one and I do want one so that made this a pretty awesome prize.  I have to hand it to John Mortimer it was a heck of nice event and there were a lot of really neat details.

Posted by nateruns@hotmail.com at 5:27 PM 2 comments:

Monday Off had some calf soreness and it had been 16 days since my last day off so I decided this was a good spot for an off day.  In terms of the calf it was a perfect choice in terms of how the week went overall I would have liked to have taken a day later in the week.

Tuesday developed a wicked sore thoat over the course of the day.
PM 9.1 at Phillips with Uta in a cold rain- actually wore a hat and gloves.  1:00:14

Wednesday sore throat has expanded to a running nose and some head congestion.
PM 6miles on road solo, in a reverse from yesterday it was a bit hot to bring Uta, 37:32

Thursday sore throat better but congestion much worse, head feels like it is in a cloud, tons of crap coming out of nose and chest.
PM road 5 with Uta, 31:47

Friday about the same as Yesterday
PM road 8.2, 51:25, this was not the best run, I felt like crap, I had some coordination issues and just generally didn't enjoy myself.

Saturday AM road 7, first 3 with Uta, dropped her off then ran solo, 46:36, feeling improved to day, not great but I slept around 12 hours and the chest congestion is largely gone and my nose isn't producing nearly as much shit.

Summary 46 miles for the week.  I got a head cold, which wasn't that great.  I have a standing rule that I don't do speed when I have a head cold because it pretty much always causes it to turn into bronchitis which seems to never die.   I'm starting to feel better this afternoon so hopefully back to moving forward this week.
I was able to improve the calf a lot which feels great now and I did increase the short day and the long run so not a lost week but obviously not what I had hoped for.
This week I have tomorrow planned as an off day.  I don't feel I need it physically but my kids have a field trip that means my day will be out the door a bit before 7am and home around midnight.  I  could do an AM run but I don't think that would be a great set up for the rest of the week given that I obviously won't be getting that much sleep Monday night and I don't hold up that well over the week after a couple of nights of short sleep.
I'm also racing again this week to help round out the CMS team for the USATF-NE 5 mile champs.  It is also a chance to take a dip stick on the fitness.  We'll see what the weather looks like but the course is New England flat so if it isn't super hot I'd like to try and slip under 25:00 but given how little I have done that is probably a very tall order.

Posted by nateruns@hotmail.com at 3:23 PM 4 comments:

Training Blog May 29 to June 4

Monday AM 9.1 miles with Uta around Phillips in 54:19, sort of an unplanned fundamental tempo

Tuesday PM 5 miles at Phillips with Uta and Melissa, 41:37

Wednesday PM 3+ warm up 15 strides with jog back recoveries, 3+ cool down. Calf a bit tired/sore after this 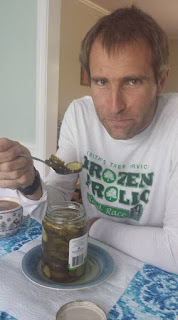 This is a pic of me eating pickles, you know because they are delicious and we needed to go grocery shopping.  That is why I'm eating the pickles I'm posting the pic because I feel like the blog needs more photos.

Summary 52 miles for the week.  Two moderate efforts.  I did a bunch of feldenkrais stuff but didn't make any breakthroughs or anything.  Some of it is very neat/weird.  Tough to describe but you really have this moments when you feel like you are reprogramming your mind/body connection.
My calf is a bit tired but I haven't had a day off in 16 days so I'll take one tomorrow.   Next couple of weeks are pretty busy but then summer comes and the living is easy.

Posted by nateruns@hotmail.com at 6:14 PM No comments: